I’m a grown up who started life as an only child.

I’ve never been a person who just shows up anywhere unexpectedly. I wait for an invite before I join. I’m not afraid of someone rejecting my invite, but I do fear others asking why I had the nerve to think that I should be included. That fear runs deep.

I went to B’s company holiday party – it was a last minute invite to a small gathering at a piano bar. He called to tell me that his work party was running late and our dinner plans had to be cancelled.

We’d only been dating two months and I didn’t know anyone at his work. My instincts were to call it a night and head to the Market by myself for a sandwich. I told him that I would be happy to take a raincheck.

B didn’t want to stand me up and convinced me to come, “Please be my date. We have plenty of bar food.”

I wanted to see him so I agreed and then ordered a Lyft.

Unfortunately, I arrived too late for bar food and everyone had already separated into their own conversation circles. I noticed that there were only a few other plus ones.

But then I saw B. He smiled and hugged me, pulling me to his side. He introduced me to the three men he was talking to. They were deep in a business conversation that was hilarious to them as they shared inside jokes. I held B’s hand and tried to follow along. After twenty minutes of standing silently by his side, my stomach grumbled. I didn’t want to ruin his fun so I wiggled my fingers free and I went off in search of food.

That’s when things went from uncomfortable to worse. I must have looked vulnerable, because a random man (not from the holiday party) grabbed me and tried to physically drag me to the dance floor. I refused, but he wouldn’t let me go. I dug in my heels and wrenched my arm out of his grip. I scurried back to an oblivious B and asked him to please take me home. He was having the time of his life and seemed confused by the situation. I whispered in his ear that a man had grabbed me. He seemed unbothered and said that the same man had grabbed his bosses girlfriend, too.

B followed me out the door, he was still tense, but he apologized for not watching out for me. I accepted his apology and thought that was the end of it.

The next day he expressed grave concerns with our relationship. He explained I embarrased him by leaving the party. Then he shared that the women in his office – who I had tried to talk to – told him that I was weird.

I cried. Even at age 50, I just wanted to be accepted and to belong.

I asked him if he would be in a relationship with someone who didn’t have his back.

I said that I wouldn’t let one of my co-workers call him names.

He agreed. He apologized.

The next day, he called to let me know that he’d told the women in his office that he shouldn’t have let them say unkind things about me. He then told them that they’d missed a big opportunity to meet me.

Apparently his words struck home and they apologized to him.

Go B!! I didn’t ask him to fix the problem, just to understand my point of view. He surprised me. 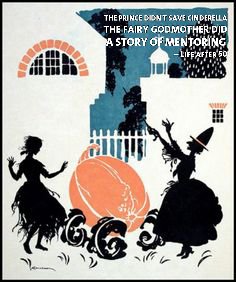 My friend is the CEO at an IT consulting company. One day she told me, “I’m not letting my daughter watch Cinderella, because I don’t want her to think she needs a man to save her.”

Cinderella is one of my favorite stories and I shared why.

Cinderella is a story about a young girl who somehow found herself in a bad situation. She dreams of personal freedom.

Another woman (the fairy godmother) mentors her through a transformation. She gives her the tools that she needs to stop dreaming and start living.

With newfound confidence, a new dress and amazing shoes, Cinderella crashes a party and meets the man of her dreams. The Prince didn’t save her, he just found her shoe and returned it. The fairy godmother helped her save herself.

I was speaking with one of my mentors. She is a retired politician and one of the most beautiful women I know. She is in her late 70’s, has the body of a ballerina, kind brown eyes, a quick friendly smile and beautiful glowing skin. She also wears clothing in a way that looks effortlessly glamorous.

We had an opportunity to discuss her success and I asked her if she thought her style had an impact?

She squeezed my hand and said, “Yes of course. But I am no more attractive than anyone else. People come in all shapes and sizes and everyone is beautiful.”

Those weren’t just words. Her timeless beauty stems from a fundamental belief that everyone is beautiful, no matter their size, shape, clothing or features. Because she only sees beauty, she is beautiful.

Anyone can be beautiful like my mentor, right now. It doesn’t take a diet, a blowout or a shopping spree. Just begin to see and reflect the beauty in others and your beauty will shine through.